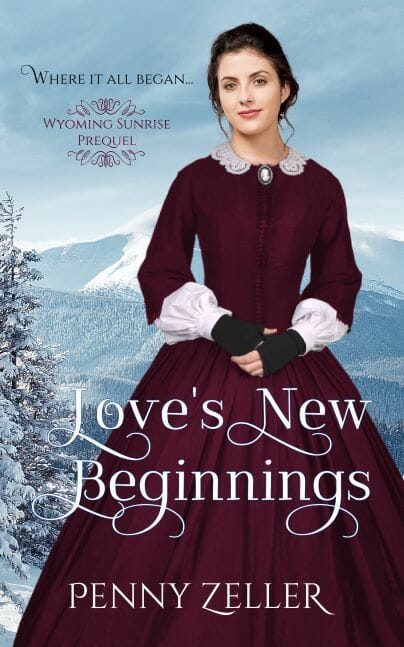 I’m giving away an ebook download (gifted on Kindle) of “Love’s New Beginnings” to a lucky winner on the day of release. Entering is easy, peasy, quadruple easy and fast as in, all you have to do is add it to your Goodreads TBR to be entered! Go here to enter. (Open to U.S. residents only).

Below is the blurb for “Love’s New Beginnings”

Where it all began…

Lydie Beauchamp recently moved with her aunts—sisters Myrtle and Fern—to the untamed Wyoming Territory. When a teaching position in nearby Willow Falls captures her attention, can she leave her aunts, one of whom just suffered a broken heart, and embark on this new adventure? Will she find the courage to persevere in the midst of challenges, one being a handsome challenge named Solomon Eliason?

Reverend Solomon Eliason has the goal of making a difference. Hired as the pastor of Willow Falls, he must convince the congregation that he is able to undertake the role of a reverend. When he’s nominated to be the adult in charge of the annual prank tradition at the school, he embraces the idea, thinking the new teacher will be an elderly crotchety woman like his former teacher. What he doesn’t realize until it’s too late is that the teacher is far from crotchety and elderly. When Lydie and Solomon’s paths cross in an unexpected way during the prank tradition at the Willow Falls school, can Solomon redeem himself in the eyes of the lovely new teacher?

Take a glimpse into where it all began with Lydie and Solomon’s story in this tender tale that reminds us that God can and does use willing hearts for His purposes.

By clicking this link, you will be leaving BookSweeps. See you soon!